If you aren't using emojis in your web push notifications – you should be.

New research by several firms shows a dramatic increase in web push notification open rates (85%), as well as, as an improvement in retention rates by nearly 28%.

According to a new study conducted by Leanplum, the use of emojis led to an 85% higher open rate for web push notifications, which also strongly influenced conversions.

Emojis are powerful and here to stay

Therefore, it's time to make emojis part of your marketing strategy, especially when it comes to your web push notifications.

If you don't believe that emojis are here to stay, consider that as far back as October 2011, Apple added an emoji keyboard to iOS as an international keyboard.

According to Leanplum, through their testing, there are twenty-five emojis they consider to be "emoji power words" which had an above-average open rate.
You should consider experimenting with some of these proven winners first to determine the effect they may have on your audience. 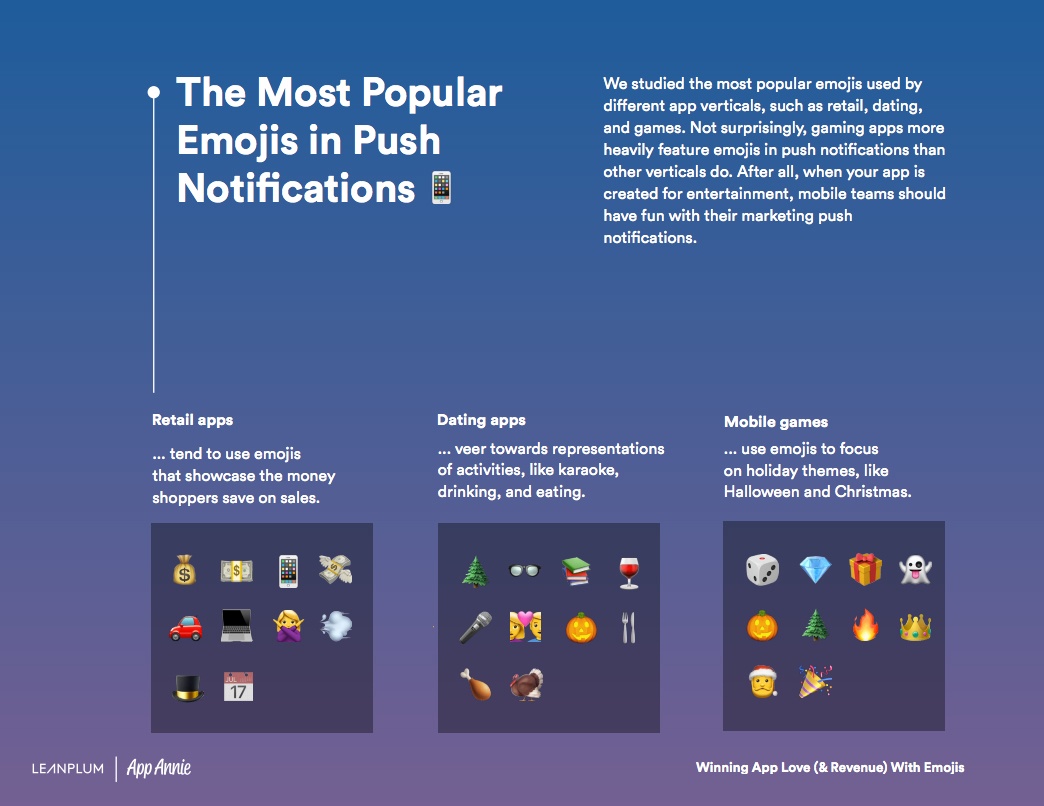 What scientists found about Emojis

A study published in the Journal Social Neuroscience called: "Emoticons in mind: An event-related potential study," took a look at the effect emojis have on people.

In short, they found that when people see an emoji – their brain lights up in the same way it does when seen an actual human face. Thus, just as we read human faces for non-verbal information, we react to and process emojis the same way in our brains.

In other words, the emotional feelings we get and emotional responses we have to facial and hand gestures from actual human beings – are the same with emojis.

If your smile, thumbs up and other gestures can make people feel good, then using them in your messages can give your audience the warm-and-fuzzies, too!

Emojis bring several things to the table that help build a connection with your audience:

Everyone gets bombarded with "serious" marketing daily. Emojis add a sense of playfulness and fun – especially when used well. They can quickly help your messages stand out from the crowd.

The old cliché of "a picture is worth a thousand words" definitely comes into play here. For the same reason that universal symbols can communicate despite language barriers, emojis do the same by sending a clear message without the need of words.

They're called emojis for a reason! They can literally convey a certain attitude that you want to express to your reader. They can imply your emotional tone, whether you are: happy, playful, giddy, excited, loving or even angry. Emojis can express a wide range of attitudes and emotions that your audience can pick up on immediately.

4. Can create a feeling

As previously mentioned, used correctly, emojis can elicit a particular emotional response in your reader. All advertisers know that tapping into the emotions of your prospect is a powerful tool. With skillful usage, emojis combined with marketing psychology can provoke a very specific response, one that can engage your reader and prompt a particular action.

According to a study by Social Media Today, the results of using emojis on social media are:

A study by Instagram found that its users from Finland were using emoji characters in over 60% of text. Comparatively, users in the UK used emoji's in 48% of text and users from the USA in 38% of text.

A few of the most popular emojis used on Instagram:

Email mailing list provider MailChimp did a study of the most popular subject lines using emojis.
The names used are from Emojipedia.

Note: These names are more the names used in common usage, rather than the official names given to these emojis as part of the Unicode standard

An agency study by myclever Agency concluded that 56% of brands experienced an increase in open rates when email subject lines included emojis. This also contributed to a higher click-through rate.

In a push notification A/B test done by graphic-design tool website Canva, 50% of its users were shown an image and the other half were shown emoji's. The emoji version outperformed the image variant by 9%.

Think outside of the box and get started with push notifications for your website!

Pushly is proud to be a v2 Ventures backed company.